Last tuesday I went to check out this nice winter crag near Lecco named Masone!

Plan of the day was trying the moves of Adam Ondra's 2009 route Masoniamoci 8c+/9a(maybe 9a he says) and see if it could have become a possible project for the near future!...
On my first day on it I was able to do all the single moves of the starting boulder problem but couldn't even link two of the hardest togheter. And I barely did the crux move, a deadpoint move from two very bad undercuts to a very far slopey rail.
Masoniamoci is defenitely a very bouldery route consisting in a super hard bottom part followed by a short but resistent 8a route!

The first part is about 12 moves long with a kinda jump start to get a sidepull, two terrible shouldery moves on gastons, a very high foot step, a crazy small undercling to match and a final brutal deadpoint move to get a slopey rail... from here you have another 5 easier but still difficult moves to get a good hold! Adam says he felt this section as an 8b boulder and I do the same!
The second part of the route starts right after the good hold with another long move from one bad edge to get a better hold with a weird heel hook... after this last awkward move the difficulty drops significantly! Easier moves on better holds but still pumpy and of course you don't want to fuck up...

On my second day on it I started to link the hardest moves togheter and I had the top part perfectly dialed. After a few more tries I felt so good on the boulder and I fell(twice) at the deadpoint!... Getting close and ready for the send I thought but my skin was trashed and I had to wait for another day...
After one day of rest I got back on my project on saturday. I felt physically good and my skin was healed enough for a few good tries! Luckily I only needed one! On my first go of the day everything went perfectly and still in the morning I was done with my route... I had all the afternoon to chill in the sun and spend time with friends!! Great succesful day!...

Photos by Could be Worse Photography © Gianluca Bosetti 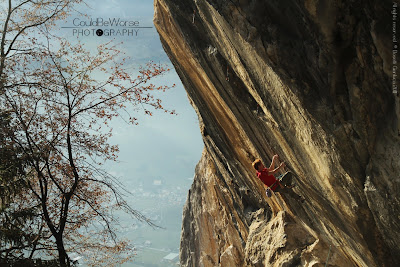 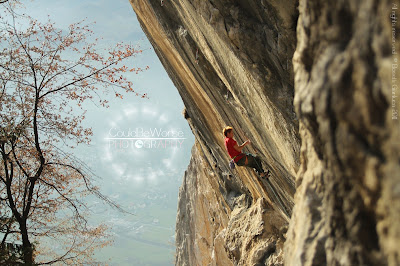 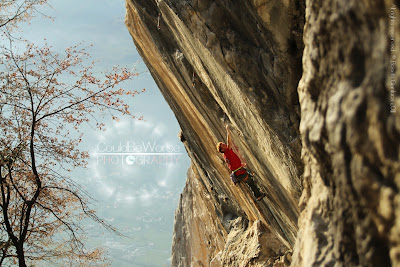 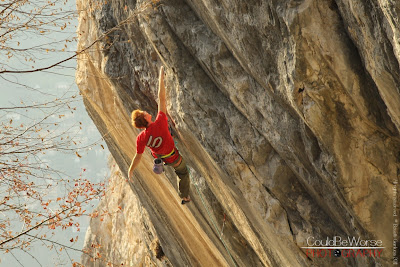 In my opinion Masoniamoci is a great bouldery route... for sure one of the best in this style I have done! The rock is a perfect limestone and the route climbs on a great looking blank 40° overhanging wall!...
I feel this route could be comparable in style and difficulty with my own Elementi di Disturbo in Gressoney. The boulder problem on EdD is maybe a bit easier but the top is harder and more resistent... I think the slash grade is perfect for both these two routes I have climbed! 8C+/9A!


Here is a video of the actual ascent by Maurizio Mangione: