Hi everybody! Happy 2012!
First I am sorry for the lack of updates... I didn't write anything for the last month or so but nothing worth a blog post happened!
Well I have to say that in December I was in one of the best shapes I have ever been and after having climbed a few hard routes in a very small amount of tries I decided to move my focus and strenght on something harder...
I have been thinking alot about which could have been my next project and after a bit I realized that one of the hardest routes in Italy was not so far from home in a "new"(for me) crag. Perfect choice!
So I immediately started to try this route called Goldrake in Cornalba near Bergamo.
Goldrake is a 9a+ opened by Adam Ondra(who else?) a couple of years ago. This route is hard! 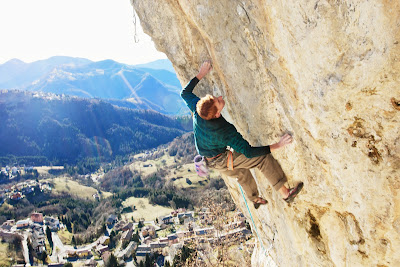 Defenitely one of the hardest I've ever tried and actually the hardest I've been close to climb.
And honestly I think it's in my top 5 of the best routes I've been on even though it has two chipped holds at the beginning in a very blank part...
Anyway after some hard days of work I felt I was ready for the send! But then bad luck started to hit me... colder temps, strong wind, holds breaking and so on... Two times I got to the last hard boulder problem and twice I fell with completely numb fingers... Shit!! My first 9a+ has still to wait... Hope to come back to it as soon as possible with warmer temps! Now it is just too cold for a 1000m above sea level crag! 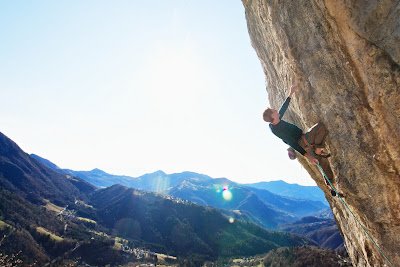 
A few days after falling at the end of Goldrake I left for Spain with high hopes of sending some hard routes... big mistake!! In a two weeks trip I couldn't climb even one of the projects I had in mind...
Biggest PUNT of the trip was on A Muerte my endless(3 years now) nemesis in Siurana(picture)! 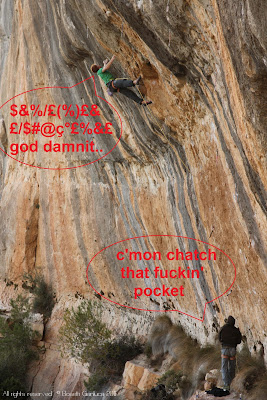 Now I'm back at home since three weeks but I didn't climb so much.  It's pretty cold out and not very motivating so I've been working a as a route setter in a bouldering/ski comp called Power Powder Contest in Aosta Valley which was lots of fun(i was the route setter for bouldering of course).
I also started training a bit like every winter...
This year I'm very psyched for rope climbing so I plan to train in various gyms and try to work on my resistance which has always been one of my weak points. We will see what happens!

Here is the video of the event: