Hello everybody!
Lately I've been really lazy and couldn't find the inspiration to write a good post...
Well you can easily find the inspiration when you have alot of free time but the main motive is that I don't have a single picure(except for Kalymnos) of this last two months and I felt so bad about that ...
But today I feel inspired and I don't care about pictures so I hope the words will be enough to entertain you for some minutes...

Let's start with Kalymnos a couple of months ago!
The North Face Kalymnos Climbing Festival has been a great event!
It was my first time on the island! I've always been a bit skeptical about Kalymnos,the climbing style,the grades and the "lifestyle and holiday nature" of the place... but eventually I really enjoyed it and I think I will return in the near future to check what else the island has to offer!
During the Festival there was a friendly competition for us Pros in a new crag intentionally developed for the event. The ambience was great and we had alot of fun! 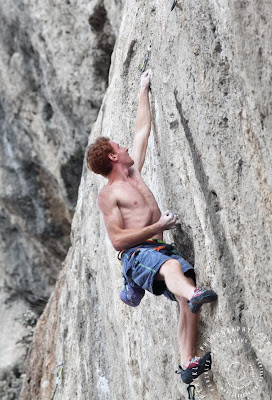 Unfortunately the climate was very warm and we were obliged to climb in the very early morning so we couldn't climb really hard stuffs. In the end five of us, Me,Alex Megos,Yuji Hirayama,Nico Favresse and Mike Fuselier finished off three of the four proposed routes! This three routes were 8a,8b and 8b/b+ and the hardest unclimbed one is actually still a project around 8c 8c+! 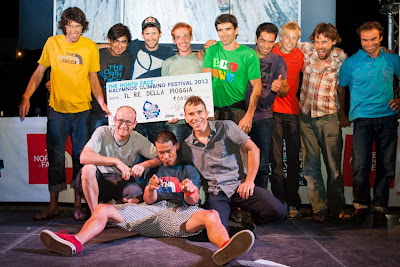 I have to thank The North Face for the invitation and the sick event they organized!! Really looking forward to next year's edition...

After Kalymnos I directly went to the Frankenjura!
I was travelling togheter with my buddy Ema and we spent all october in an apartment by the Eichler Campground in the tiny village of Untertrubach! It was defenitely a climber's apartment and we had the chance to meet some great people from Germany,The Netherlands and Australia!
My climbing during this trip has not been the best... After Kalymnos I felt so weak and I needed a week or so to get back in shape...
Another weird thing was the weather... First very variable and unpredictable,then very good but cold and the last ten days bad and cold until it snowed out...
After I climbed some beautiful routes between 8b and 8c+ I decided to start trying something harder.
The choice was very vast and my idea at the beginning was to take a look at a 9a+ called Corona but then I decided to try The Elder Statesman 9a since I had already climbed the easier 8c+ left start version and I thought it would have been a quick work... Big mistake!!This route turned into a real nemesis... I had a few great attempts at the beginning just after I climbed the 8c+ version then real disaster... weather and skin conditions were completely against me and I've never finished it feeling so close that every attempt could have been the last even in glacial temps! But well... failure is a big part of climbing and every trip can't finish in the right way!...
Anyhow I managed to climb some great and hard routes:
- The last rites 8c+;Masters of the universe 8c/c+; Cringer 8c; Steinbock 8c; Powerplay 8c


In november I had the chance to spend the last possible weekend at Bus de Vela in Trento before the season ended! Conditions were perfect for me... Every other climber at the crag was complaining about how cold it was but personally it felt like the ultimate friction... Probably I got used to the cold in Frankenjura!
Last year I bolted a route just left to Il Frutto del Diavolo and named it No More Passion. The first part looked hard but climbable until a good hueco like hole. From here the route is still 7/8 more meters long. Last 4meters looked ok but the 3 meters in between the hueco and the last ok meters were really blank...
I remember I noticed a small edge,a tiny one finger pocket and a flat pinch in this part but absolutely no good feet...
Basically I had no clue if this part of wall could go until the day I climbed it.
After the bolting I didn't have the time to try it and finally this summer with heinous temps I decided to have a look at the route. As I thought the first 18/20 meters were climbable and very good! On the second part I couldn't move and it felt like...impossible! The edge was horrible,the mono was so small that I couldn't fit with my medium finger, the pinch was bad and so far away and the feet... only smears!!
That's why I thought about climbing the bottom part until the hueco and then link it up with the upper part of  the route just left resulting in a beautiful 8b called Terminegro!
I admit I also thought about chopping the bolts but finally this fall its day came again and I said to myself why not to take another look at the holds with the ultimate friction!?!?!
Crazy... the edge felt not too bad, the mono was still tiny but I could put my ring finger in and the pinch didn't look too far away anymore! Suddenly I could do the single moves and felt like the climb was possible!!
Next go I barely did the first 8a+/b part to the hueco again. Luckily here the rest is very good and you can recover and get ready for the real business. Without any ambitions I started the hard boulder and with a huge fight, one of the biggest I've ever done I would say, I managed to do the boulder and rested before the last yet hard but easier moves! Another battle and I was at the chain!!
What a great feeling and relief! First of all because the process is complete, I bolted it and now it went free and second because I had many doubts if this route could go or not and suddenly I climbed it with quickness...  climbing will never stop to surprise me!...
I really have no idea about the grade but I think it is in the 8c range!

A few weeks ago I decided to get back to try my last season nightmare 9a+ route Goldrake in Cornalba...
This time I didn't want to project it  and take it seriously like last time. I had less time(only a couple of weeks before leaving again) and I thought if it goes well I will do it and it would be great but If I won't do it it will not be a problem!
In the end I had the chance to try it only a few times... I couldn't always find belayers. But the times I tried it went well and I had some good attempts! Can't wait for next season on it!

Right now I'm packing for my next big trip in Spain!!
The plan is staying in Catalunya for a couple of months travelling with a campervan togheter with my friends Silvio Reffo and Mauro Giordani that will also film our climbs and experiences!
We will keep a blog updated(probably in italian) with photos and videos on the website www.nosiestaspaintrip.com(it will be online in a few days) so stay tuned!!