Hello everybody!
Summer is actually here, temps are growing and it's defenitely time to move in higher altitudes to find good conditions for climbing!
But first I will give you a quick recap about what happened during this past spring season!

ENGLAND
The main reason of my trip in the UK was the CWIF bouldering competition in Sheffield. I got an invitation to represent The Climbing Works gym team aka Team WAD togheter with Rustam Gelmanov, Alex Megos and Melissa Le Neve!
Of course we won the team race being almost unbeatable!...
The Event has been great, good atmosphere, good people and very good boulders. I think I climbed well during the various rounds and managed to get a final 3rd place after Frenchman Tito Calyron and Alex Megos! 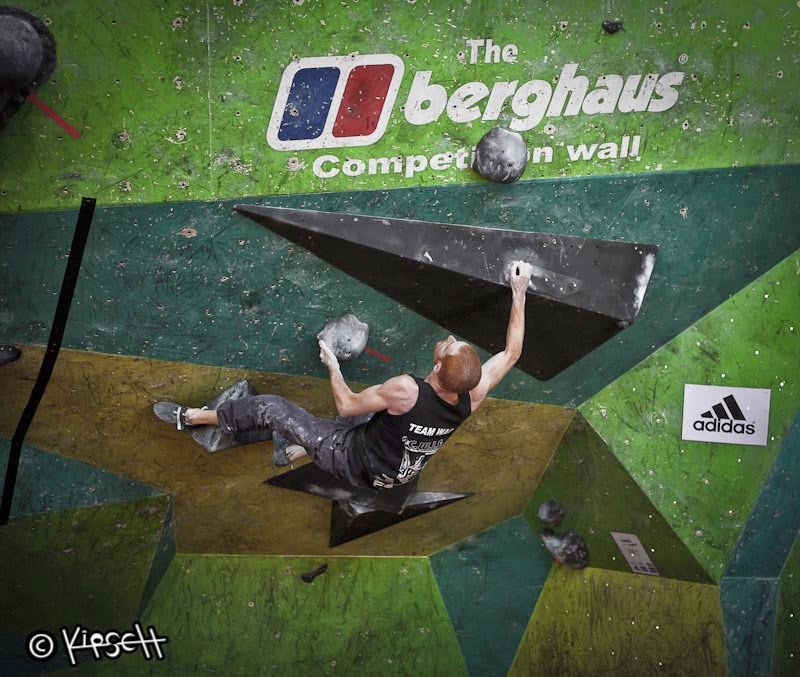 After the comp me and the Italian team, Stefano,Riccardo and Marco, we stayed around for a full week of climbing in the Peak District! The weather was decent without much rain. We visited some of the classic gritstone areas and spent a couple of days on the limestone too. 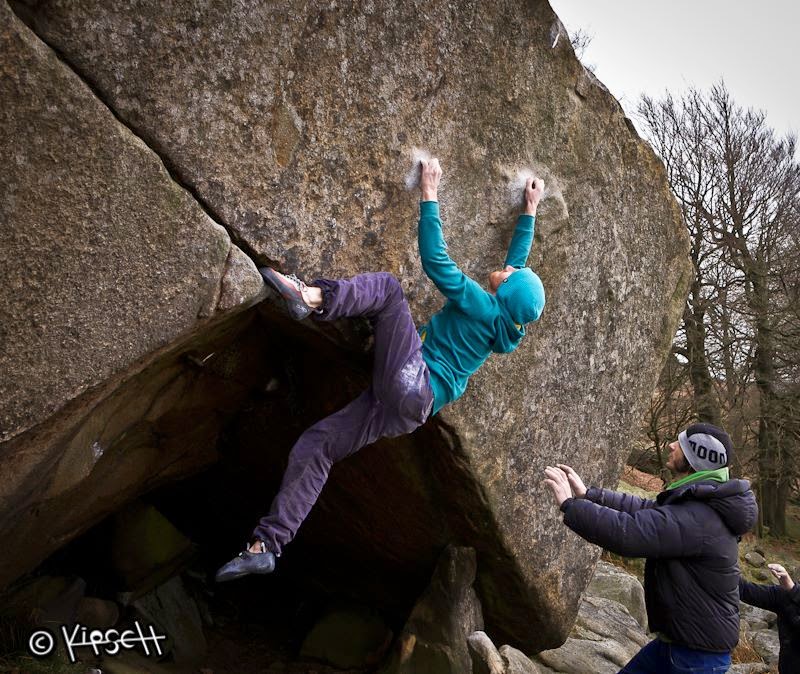 The highlights of the short trip were:
- The Ace 8b in Stanage, super classic by Jerry Moffat
- Mecca 8b+ in Raven Tor, first 8b+ in the UK
- Climbing on the first 8c+ in the world Hubble

OUTREFER
Aosta Valley never stop to suprise...
I remember walking between these boulders on a lazy day a few years ago, without giving too much attention about the real quality of the lines...
When we came back this spring, with a more careful eye, we realized the real potential of the area! We kept coming back several times before the heat came in and brushed many great boulders...
Since my friends were more focused on cleaning and climb the moderates I spent my time trying to open some harder projects!
Two of them are real world class problems:
Incidente a Glasgow 8a+
Gabri Moroni - Incidente a Glasgow from rivoli on Vimeo.
Chi Tocca Muore 8a+
Gabriele Moroni_Chi Tocca Muore from rivoli on Vimeo.


WORLD CUPS
After 3years off I decided to come back to the competition world.
I really wanted to see how far I could go with some serious training and see if I still had the right level to climb with the best competitors in the world.
But first I had to be selected in the national team. So I competed at the first Italian Bouldering Cup in Rome.
I had to do all the rounds since I had no points in the national ranking. It was a really tiring day but finally I managed to win the comp and got my spot in the national team! 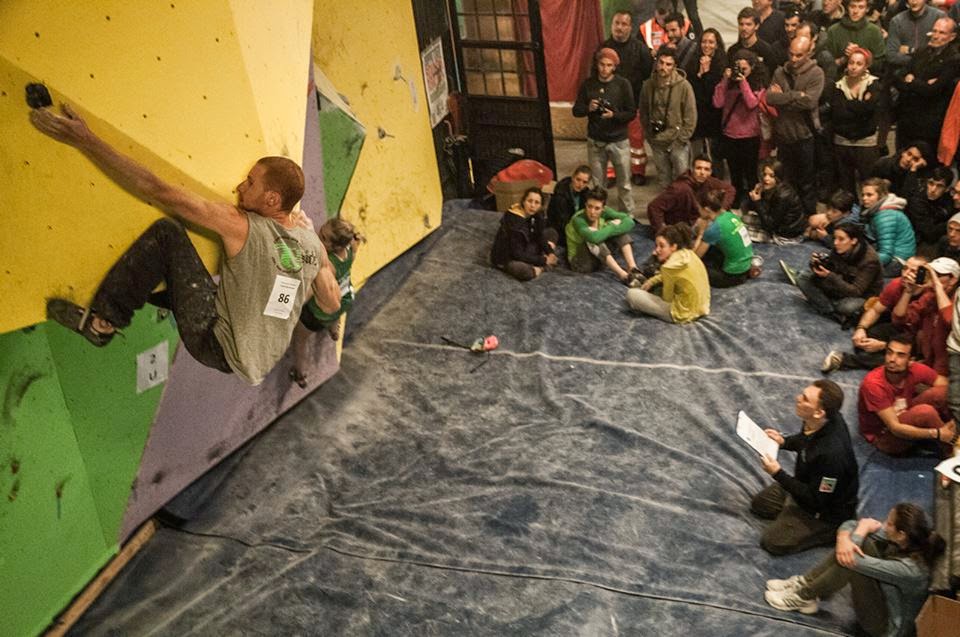 First World Cup I took part in was held Grindelwald, Switzerland.
Qualifications went well, I was a bit nervous and insecure on the first couple of problems but then I managed to relax my nerves and finally sent all the boulders but one and secured my place in the next round.
The day after was much better mental-side. I was already happy of being in semifinal on my first "come back" competition!
I felt physically good during my climbing but I made some mistakes on the tricky boulders. At the end of the round I finished 3 of the 4 proposed boulders! Not bad.
I had to wait until the last climber climbed the last boulder to know if my performance was good enough to be in the finals but at the very last go before the alarm rang Jan Hojer topped his last boulder and secured his place in the final. That meant I ended my competition in 7th place, just one spot out of the finals!... Basically the difference between me and the 6th qualified finalist was just a single attempt to top a problem... What a shame! 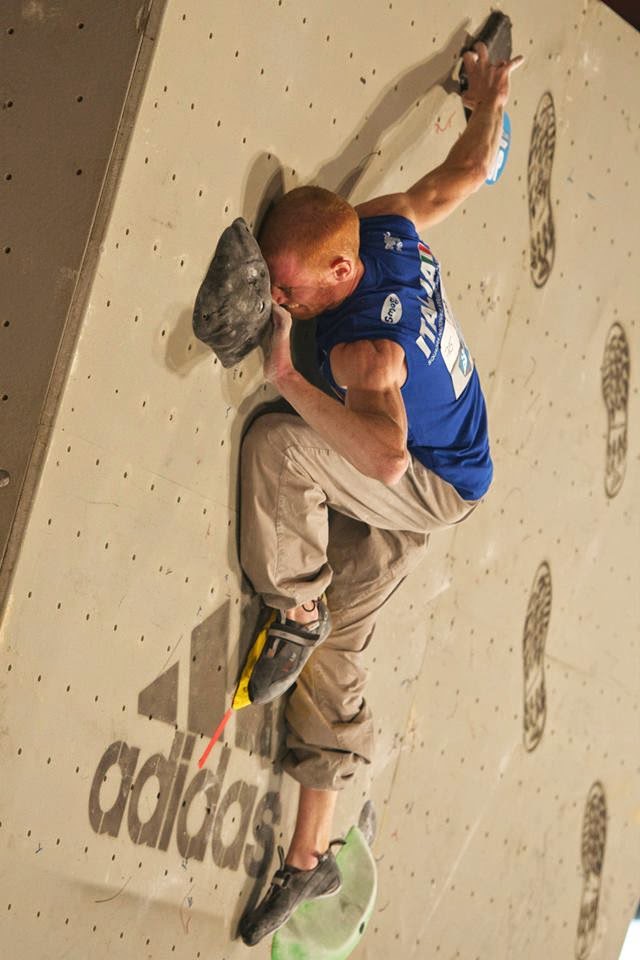 I was a bit desolated but at the same time glad and proud about how the competition went! I was again in the top 10 competitors and with the extremely high level of the World Cup athletes nowadays I think it was a really good final result!
Next World Cup round was just one week later in Innsbruck, Austria.
There is not much to write about this comp... Because since the warm up for the qualification round I felt in horrible physical shape. No power, not reactive, I had two splits on both the medium fingers so I had to climb with tape on and my skin was sweating so much...
Qualification round was really hard, other guys said one of the hardest in the last years. I was barely able to flash 2 problems and still managed to pass the turn 6th in my group.
This gave me a bit more confidence for the next day. But semifinal was personally a real disaster. I felt worse than the previous day and my skin was completely trashed and wet. I just couldn't stay on the holds and feel the grips.
At the end I topped the first two easy boulders like many others but I had no chance on the last two. I finished my comp in 17th place...
Not a very good result but still in the first 20(semifinal). 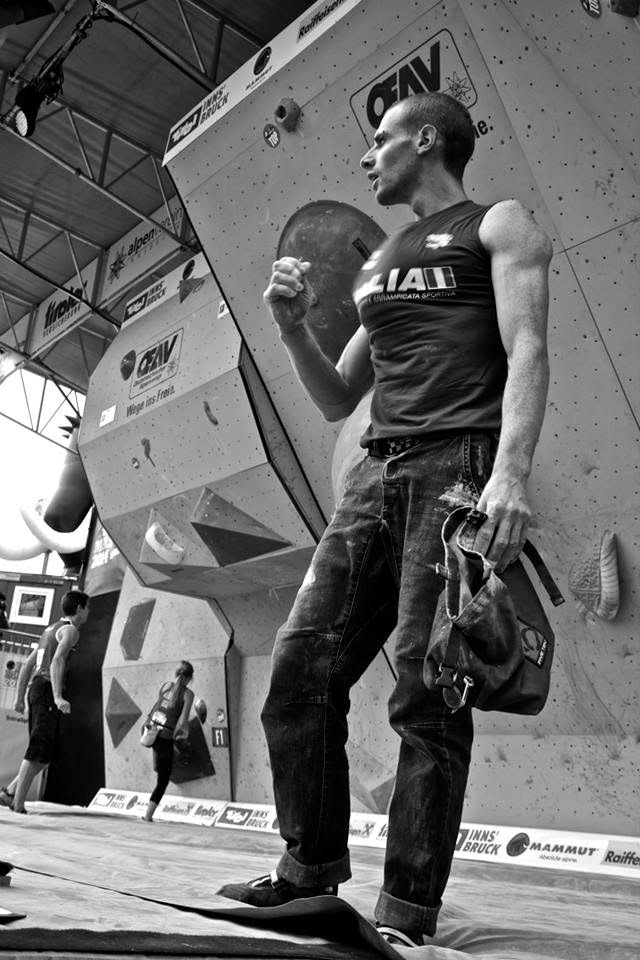 Next WC I will take part in will be Laval,France in a bit more than a week! I still have a few more training sessions before leaving so I hope to get into great shape by this important date...

FRANKENJURA
I didn't plan the traditional Franken spring trip this year... due to other obligations, trainings for the competitions and other stuffs.
One day, checking out the last Alex Megos' ascents on the internet, I got the Call!
The desire to climb in the Frankenjura was just too strong that some minutes later I sent a text message to my usual Franken partner Ema... Are you free next week?
Of course he was and we quickly organized the trip togheter with two other good friends, Andrea and Marco!
Since this was their first time in the area, we climbed in different cliffs every day without a real program or projects!
It was a great week and despite the poor weather, we climbed alot and everybody really enjoyed the trip!
This time I couldn't focus on one single project, I wanted to take my friends on the best sectors, so I climbed on "easier" routes from 8b to 8c+ such as Apollofalter 8b/b+, Linie 1 8b/b+, Ronin 8b+/c and Hattori Hanzo 8c+!


ARCO
Lately I made some two days trips in Arco!
First time this spring was right after the WC in Innsbruck on the journey back home.
As I said before I was a bit pissed off about my performance at the comp so I needed a couple of days on the rock to get back in the right mood.
The two days I spent here both I climbed in Nago. Last year Markus Bock bolted some beautiful short routes on a big boulder just below the main wall.
I already climbed some of his creations last year. One of them was Ghost Rider 8b+, which is a variation of the main line, Warbeast 8c.
This time I quickly sent Warbeast on my second attempt and started trying the hardest route, so far, on the boulder, No Hope Goat Farm 8c+ that Markus opened last winter!
This route starts with a really hard 10moves boulder problem with a very hard clip followed by other 20moves of 8a.
Second day on the route I was feeling good and after a few failed attempts in the first part I managed to pass the hardest part and keep it togheter till the chain!
The next two trips I made to Arco were actually the last two weekends...
First weekend was really warm, so we decided to go climbing in a crag just above Rovereto. I was pretty excited to go there and check out Back Road, a 9a Adam Ondra opened in april.
I spent the day in good company and togheter with Silvio Reffo, despite the warm temps, we were able to find all the betas and do the moves!
The route is amazing. It is about 20meters long but very bouldery at the top. The first part is an already existent 8a+ to a first chain followed by a 12moves sequence of 8a+ boulder with some bad holds and feet.
The next day we went to Narango hoping to find better conditions but the temps were even higher.
I tried a couple of times the last route I was missing there, an 8c/c+ from Cristian Brenna called Natural Present but it was incredibly warm for my tastes so I stopped climbing and saved the energies for the next day training session...
During the week I kept checking the weather forecasts for the weekend as it seemed like temps were going to drop significantly!
So I decided to drive to Arco again and try my chance on the two routes I tried the previous weekend.
Saturday morning I was under Back Road again! Conditions were one million times better than last saturday so I immediately got psyched! After a couple of warmup goes to try the sequences I felt in great shape and ready to give some serious attempts!
Next go was really good and promising. I got to the last boulder but I couldn't get the mono crimp hold right and fell.
After a good 40minutes I gave another attempt climbing perfectly. I got the point where I fell before feeling very good but in an adrenaline rush and having too much confidence I forgot to move a foot on a higher foothold so I got stuck for a few seconds and eventually dropped off without even being really pumped or tired! Probably the biggest punt in my career!...
So I lowered off super pissed off and disappointed.
After a good hour of break I decided to give one last A Muerte go.
I felt more tired but I tried to give my best not wasting too much energies. With no mistakes I got to the crux and everything was dialed perfectly... I was feeling less strong than before but I gave 110% on every move! I got to the point I forgot to move the foot before but this time I couldn't make mistakes and did the last two easier moves to the last jug!! Chain!!
Every thought and stress went away and it was only time to celebrate with friends and get ready to cheer up Italy on the soccer match with England that same night!...
After a good night out, the sunday was defenitely more chilled and relaxed. Woke up late and went to Narango. I was feeling pretty lazy that day but I knew I still had one duty to fulfill if I wanted to go back with all the homeworks done...
So it was time for Natural Present again.
One go to put the draws on and brush the holds. Next go I fell at the last hard move.
Last go best go once again, I climbed efficently and faster than the pump and finished the weekend in the right way...
I was really glad Cristian, who opened the route a few years ago, was there too cheering me and trying his project Cinque Uve 8c!
And thanks as always to all my friends from the area, the best support team I can ever have!

Until next time...
Cheers
Pubblicato da Gabriele Moroni a 02:40